The following is the D’var Torah Speech given by Jacob Hale on the occasion of his Bar Mitzvah this month.  Mazel Tov to Jacob and his family!

My Torah Portion is Emor. This section of the Torah primarily details the holidays of the Jewish calendar.

Then, it suddenly takes a timeout to provide a single verse discussing the law to leave parts of the harvest for the poor. I am focusing on this passage, Chapter 23: Verse 22.

This verse states that “when you reap the harvest of your land, you shall not reap all the way to the edges of your field, or gather the gleanings of your harvest; you shall leave them for the poor and the stranger.”

The great thing about Reform Judaism is that we take lessons from thousands of years ago and relate them to our current lives. To paraphrase that passage, God doesn’t want us to take all we can get, even if it means sacrificing some luxury in our lives.

In Biblical times, most people were farmers, but nowadays most people live in a city or town. Like me. I live in Austin and although I am lucky enough to live in a house with a backyard, I can’t exactly leave some of my harvest for the poor and the stranger.

1. I don’t farm my backyard and
2. Even if I did, the poor and the stranger wouldn’t wander around in my backyard.

Our modern equivalent of harvesting is our paycheck and free time. Although financial help is both needed and meaningful, in my opinion, spending time to connect with people who need help is even more rewarding.

The feeling of seeing and interacting with those you are helping is so amazing that doing good deeds actually benefits the one helping.

I could come up here and be one of the 5000 people saying that there are problems in the world and we need to address them, but one big problem is people want to help, can help, feel an urge to help, and we do help, but we only do that if we don’t have to help people in our own backyard.

For my mitzvah project, I worked with Mobile Loaves & Fishes, a social outreach organization that empowers communities into a lifestyle of service with the homeless. The mission is to provide uncompromising hospitality to our brothers and sisters in need.

In 1998, there was enough money to purchase a truck for the organization. That began the Mobile Loaves & Fishes Truck Runs. For years, MLF volunteers, including lots of us from Temple Beth Shalom, have been packing meals in trucks and delivering them to Austin’s homeless population. We go to their backyard to serve them.

We could actually see the appreciation on their faces. It was a direct action and felt very good. 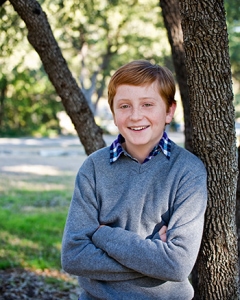 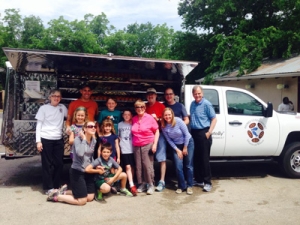 Recently, MLF started a 27-acre community that provides affordable, sustainable housing and a supportive community for the disabled and chronically homeless in Central Texas. They found an empty plot of land in Austin to use and the city agreed to allow it, but the neighbors complained and complained until they stopped it.

Almost all who complained actually said they wanted to help as long as it was not in their backyard.

Finally, Mobile Loaves & Fishes found a place just outside the city limits to put the Community First! Village, but were still worried because the county commissioners needed to give their approval.

The key to securing neighborhood support was the vote of Commissioner Davis who represents that neighborhood. It was assumed that he was not on board. When he finally went out and saw what was planned, he changed his mind.

He then told all neighbors and the other county commissioners they also needed something like this in their area, and he added “Yes, in my backyard!”

C’mon man! Early in this d’var I commented that even if I had a garden in my backyard, the poor wouldn’t be wandering around back there. I know I should have said I would welcome the poor into my backyard.

If we can all get rid of the “Not in my backyard!-syndrome,” and follow in Commissioner Davis’ footsteps, we can make the world a better place.

In April, I got together with some of my friends and family and we volunteered at the Community First! Village.

This was a very significant experience to me.

We spent several hours on a beautiful Saturday working alongside current and future residents. We cleared brush, worked with the chickens, and dug holes for fruit trees.

One special thing that jumped out at me was the people we worked with. One 32-year-old man was saying how he had addiction problems for sixteen years, and his faith saved him.

Although he is a Born-Again Christian and connects with God in a very different way than I do, we were still able to come together and do good in the world as a team.

Isn’t that what religion’s all about?

Remember how I said the law to leave part of the harvest for the poor was stuck in the middle of a description of the Jewish holidays?

A lot of people may believe this is far out of context.

The Talmudic Sages had an answer for that.

They explained: “The Torah saw fit to put this verse in the middle of the verses about Passover and Shavuos on one side, and Rosh Hashanah, Yom Kippur, and Sukkot, on the other, in order to teach us that whoever gives the gleanings, forgotten sheaves and corners to the poor, is credited as if he had built the Temple and offered sacrifices within it.”

This seems to be an example of Judaism adapting the Torah to more modern times.

Wow. Parsha Emor reminds us that we are obligated to care for others, which is the ultimate expression of God’s presence in our daily lives.

Every year, people spend hours upon hours in church and synagogue learning about God’s will.

Imagine what it would be like if we spent most of our time out in the world doing God’s will.

I am challenging you, the congregation, to do more for the world, say “Yes in my backyard,” and give up some of your free time to help the people that need it most.

Thank you and Shabbat Shalom.

Important Update About Friday Movie Nights at the Community Cinema

One of our top priorities as an organization is the safety and health of Community First! Village neighbors, volunteers, staff and visitors. Out of an abundance of caution related to the current coronavirus (COVID-19) outbreak, we have made the difficult decision to put all of our free Friday movie nights at the Community Cinema on hold until further notice. Please note that all movie nights have been canceled at this time.

Please know that we have made this decision after careful consideration, and are grateful for your patience, understanding and support as we all navigate this uncertain time together. Feel free to reach out directly to our Community Cinema program manager, Ed Travis, with any questions. (ed@mlf.org)