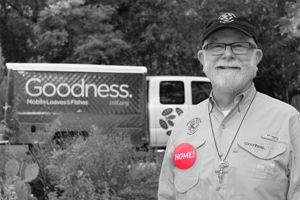 Join Alan on a gritty journey of Tex-Mex theology in his new podcast, the Gospel Con Carne.

For Alan Graham, it is all about his relationships—with God, his family, staff members and certainly the homeless men and women he’s been engaging on the streets of Austin for more than two decades.

Alan is the founder and CEO of Mobile Loaves & Fishes (MLF), a social outreach ministry that provides food and clothing, cultivates community and promotes dignity to homeless men and women in need. Previously a real estate investor and developer, Alan founded Trilogy Development and the Lynxs Group, which developed Austin’s airport cargo facility and similar facilities at airports around the country.

In 1998, the seed for the idea of Mobile Loaves & Fishes had been placed on Alan’s heart. He and four friends boldly answered God’s call to “love your neighbor” by delivering meals to homeless men and women from the back of a green minivan. Alan readily admits that the group’s original approach for serving the homeless had some flaws, but with the help of a formerly homeless man, Houston Flake, they perfected the model that Mobile Loaves & Fishes successfully uses today. Since its founding, MLF volunteers have served more than 5 million meals with a side of hope to homeless men and women living on the streets of Austin, and the organization has spawned similar food truck ministries in other cities across the U.S.

Alan also is the lead visionary behind MLF’s Community First! Village—a 51-acre master planned development in northeast Austin that provides affordable, permanent housing and a supportive community for men and women coming out of chronic homelessness.

Alan and his wife, Tricia, were married in September 1984 and have four children of their own, as well as a niece they’ve been blessed to raise and include in their family. Alan is a published author of the book Welcome Homeless: One Man’s Journey of Discovering the Meaning of Home. He also is the host of the Gospel Con Carne podcast, which explores the woundedness of society through untold stories of individuals who have encountered homelessness.

Important Update About Friday Movie Nights at the Community Cinema

One of our top priorities as an organization is the safety and health of Community First! Village neighbors, volunteers, staff and visitors. Out of an abundance of caution related to the current coronavirus (COVID-19) outbreak, we have made the difficult decision to put all of our free Friday movie nights at the Community Cinema on hold until further notice. Please note that all movie nights have been canceled at this time.

Please know that we have made this decision after careful consideration, and are grateful for your patience, understanding and support as we all navigate this uncertain time together. Feel free to reach out directly to our Community Cinema program manager, Ed Travis, with any questions. (ed@mlf.org)