The primary cause of homelessness is a catastrophic loss of family.

You can’t help but be taken in by his big smile and friendly demeanor. Most days you will find my friend JR sitting on his porch visiting with his neighbors. He has a smile for everyone and may even play the blues for you on his harmonica.

“This home is a mansion to me. I have a place where I can eat, sleep, bathe and get healthy. I feel like a human again.” -JR

JR told me that he only had a limited grasp of what “singing the blues” really meant as he shared stories of his childhood. He grew up in a large family in an impoverished and dangerous part of Fort Worth. Life, love and loss deepened his understanding once he had a family of his own. He met the love of his life while visiting his brother in the hospital. It took some time for JR to convince his wife to marry him, but once he did, they were together for 32 years. They had two sons and lived a life many of us can probably relate to – one with ups and downs, occasional conflicts and reconciliations – but they were always dedicated to each other and their family.

Everything changed for JR the day his wife died.

“I wanted to die when she died. I didn’t have a relationship with my kids and I just didn’t want to live anymore.” -JR

When JR’s wife passed away, he was completely devastated. Estranged from his sons, he turned to drugs for an escape from his life that was spiraling out of control. He struggled with addiction, didn’t have a job and he eventually found himself homeless and alone. JR believed he had nothing to live for anymore, and even had serious thoughts of ending his own life.

In an effort to rebuild his life, JR made his way to Austin. He came here with nothing but memories and a desire to be a better man. He was staying at a shelter and was fed many days from the Mobile Loaves & Fishes food trucks. Through our truck ministry he not only nourished his body, but found healing for his soul through the relationships he formed with volunteers. 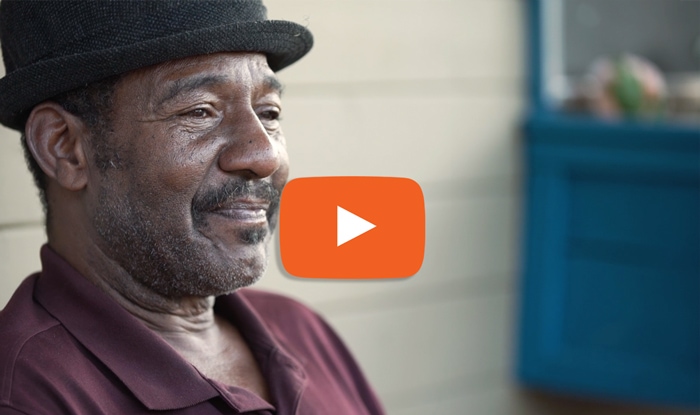 “They fed me and I got stronger. I started getting my mind back and staying away from drugs. If it wasn’t for the people I met, I never would have made it.” -JR

At Mobile Loaves & Fishes we offer so much more than a meal.
We offer dignity, empowerment, relationships and community. We offer a way home.

Will you open your heart and provide the relief our friends so desperately need?

Your donation will bring nourishing meals, life-saving water, and other basic necessities to men and women suffering on the streets this summer.

At 64-years-old, JR could no longer survive on the streets. He needed a safe and permanent place to live. He needed to be surrounded by people who cared for him – people he could trust. The food truck volunteers told him about Community First! Village, and he knew this was the place he wanted to call home.

“I have everything I need to start a new life, and people who care about me. This is a place I can stay forever!” -JR

JR has found home and people who care for him, but there are many others still suffering on the streets. They are praying not only for food, but also for people who care and a place to call home.

Because of your goodness, lives truly are transformed as we lift our homeless neighbors up off the streets and into community and home.