Did you know that you are helping to restore, transform and save lives? YOU ARE. EVERY DAY.
We know this to be true because our friend Lee told us you saved his life.

Not too long ago, Lee had a life he loved—a successful career, a home, a car and friends who shared his love of music. Then he encountered a series of unfortunate events in life, and Lee lost it all. Some nights he took refuge at a local homeless shelter. Other times he had no choice but to sleep on the street. He felt alone and afraid and didn’t know how much longer he could survive. Thankfully, he connected with a social worker who told him about Community First! Village. Because of you and your loyal support, Lee was rescued from the ravages of the streets and now calls Community First! Village home.

Not long after he moved into the Village, Lee was in a traumatic bus accident that severely injured his leg. During this time, he discovered what Community First! Village is all about. His Village neighbors visited him in the hospital and took care of his cats while he was away. When he returned home, they checked on him regularly making sure he had everything he needed to heal.

Housing will never solve homelessness, but community will.

“You have saved my life and I am so thankful.” – Lee 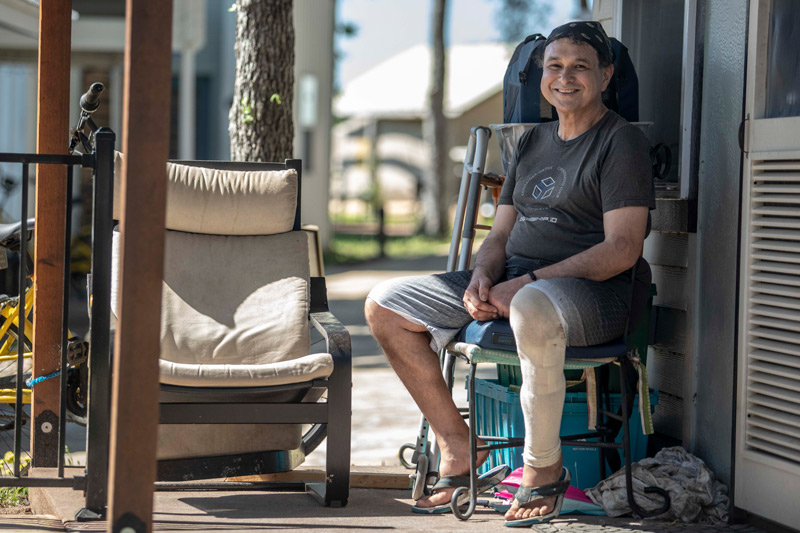 You are the Goodness that is Mobile Loaves & Fishes.
We are so grateful for you and we count you among our blessings.

You are helping our homeless neighbors restore, transform and rebuild their lives. Your generous gifts provide opportunity, dignity, community and home to the men and women who need it most.

Today, Lee no longer feels alone or afraid. He is surrounded by people who care for him and are committed to helping him continue to heal from life on the streets. He is getting stronger every day and is becoming an active part of the community. Lee works as a volunteer and tour group leader and is happy to help. He rediscovered his joy in music and is a member of the ‘Pure Goodness Band’ with other Community First! Village neighbors. Through your support, Lee has truly found his life and his home again.

“I’m really proud to live here. I feel like this is heaven on earth. I have everything I need here. This is home.” – Lee

Living here has brought change to my life, and now I am able to help somebody else. This is how to build a community.

Hear more of Lee’s story in his own episode of the Gospel Con Carne podcast, hosted by MLF founder Alan Graham.