After several minutes of shifting and negotiating various levels of discomfort, I settled at fetal position.

Laying there with hands sandwiched between my knees, I was determined to get some rest. It would not come easily under these circumstances. I would have to ignore the aching in every muscle of my body against the hard asphalt and somehow find a way to disregard the occasional Texas sized cockroach leisurely wandering my periphery, completely unthreatened by my presence. I sunk down into my sleeping bag, zipping it over my head, and fantasized about the cozy pillow top mattress I had taken for granted just one night ago.

The day had begun like any other Saturday. Significantly better actually, like some poetic cliché of the perfect weekend. I awoke just before sunrise with an inexplicable surge of energy that would contribute an extra half mile to my morning jog around Lady Bird Lake. The shower that followed would showcase my vocals on a solo mashup performance of praise and worship songs that would end only on account of an abrupt surge of cold water. A cunning technique, I am convinced, crafted by the city water board to keep unruly residents like myself compliant with the standards of Travis County’s drought restrictions. I quickly dressed, threw a journal, a pen, and a book into my sling bag, and walked to Dominican Joe’s where I had the rare fate of finding the coveted red hammock on the back patio unoccupied. Won’t he do it? I carefully sat and then slowly eased my body securely into the hammock, gently lying back to savor every moment of this personal triumph. After a long week of 4 a.m. flights, traveling the rural roads of South Texas, facilitating employee round-tables, implementing action plans, and answering hotline calls in the middle of the night, this was my day to be completely and unapologetically self-indulgent. I would lay here and relish every slow sip of this latte.

Just as I had begun to quiet my mind, a text vibrated my bag. I cringed at the possibility of some urgent issue at work requiring immediate action. I reached my phone relieved to find a message from my cousin letting me know that the nonprofit organization she works for is doing their annual “Street Retreat” tonight, and would I like to join her. She had mentioned this before. It was basically an opportunity for citizens to camp out for a night to experience what life is like for Austin’s growing homeless population. Without hesitation, I replied, “YES!”

That “yes” all-caps, exclamation point, had landed me in this parking lot, fully zipped into a borrowed sleeping bag, making life decisions. What’s more important, breathing or avoiding these mutant insects? Insect avoidance was taking a strong first place when I heard heavy breathing and a set of clumsy footsteps hastily approaching. I unzipped to my nose to find an elderly man standing about seven feet in front of me. “I usually have this spot to myself,” he said with a raspy smokers drawl. Before I could muster a response to what I am sure was an invitation to explain my presence here, he continued, “Got a spot on South Lamar today.” “Oh, Yeah?” I said, fully aware that South Lamar is a prime intersection for soliciting cash during rush hour traffic. “Yeah, today was a good day,” he said, pausing with a grin to pat his front coat pocket. He was a cherub of a man with a red sunburned face and friendly eyes. I was struck in that moment by the realization that South Lamar was his equivalent to my red hammock. There was no difference in the pure sense of joy we felt in our morning conquest at separate ends of the city.

I sat up and watched as he pulled the cleverest array of items from his duffel bag: a canteen, a pair of cargo pants with the tag still on them, a small pillow. He’s Mary Poppins, I thought. “My buddy wanted to get some liquor but I ain’t drank in two days,” he said with a pride that let me know this was a long stretch by his standards. “He’s a wimp anyways. Wouldn’t even come over with me when he saw ya’ll camped out.” “Yeah, my bad,” I interjected, not to miss another opportunity to explain our invasion on, what was clearly, his turf, “we didn’t realize this was anyone’s spot.” “Hmm,” he grunted, pausing for the first time, “What’s your name?” “Naomi,” I responded, “What’s yours?” “Vern*,” he said. “What you doing out here, Naomi?” he asked suspiciously. “I’m camping out, for the night, with an organization that provides services to the homeless.” “Yeah, I knew you wasn’t for real,” he said more to himself than me. “You know why we sleep in this church parking lot?” Vern asked. I was stumped. “No, why?” I asked. “Police can’t mess with you on church property. It’s against the law.” “Really?” I responded. “Do they mess with you otherwise?” I asked. “You just got to know where to be. They’re not bad in Austin. Dallas on the other hand…” 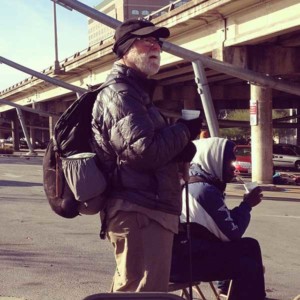 MLF Founder Alan Graham on one of the Street Retreats.

Vern talked to me all night about everything in no particular order. I would learn that he suffered from PTSD and self-medicated with alcohol, a habit he was trying to kick. He had gotten his “survival bag” from the Veterans Administration (V.A.) Hospital. He had left home on his own at thirteen years old to escape an abusive father. Vern had a “real good woman” once, who loved him to death, but he screwed it up. He told me how some “jerk in a pick-up truck” had cursed him earlier in the day. “Told me to get a job!” Vern said, his voice trailing off as if he was reliving the incident in his mind. “Do you see this?” he asked, shaking a large zip bag full of prescription meds. He cataloged for me one by one, every medication and what it treated. “And this one here is a new prescription for a brand new diagnosis,” he said, squeezing between his fingers a large pill bottle inside the bag. “You ever see a want ad for an old disabled Vet with PTSD?” His conversation lingered there for a while.

Vern was clearly upset, stung by the words of a stranger. He was a man with a lot of pride. He was proud of his military service. He was too proud to carry a sign for solicitations. He made his pallet with pride, neatly spreading his flannel blanket over a cardboard sheet and a yoga mat. He had reasons for being out here, reasons that the “jerk in the pick-up truck” didn’t care to understand. Vern didn’t want to be dismissed or labeled or judged. I understood that. “I’m sorry, Vern. Some people are just cruel,” I said. He was silent for the first time since our introduction.

“Would you mind if I write about you?” I asked. He smiled as I pulled my journal from my backpack. “You a writer?” he asked. “Yes,” I replied. “Well, I got some stories,” he said before rising, without warning, from his pallet. I watched him walk behind the dumpster at the corner of the parking lot and return with a cardboard box. He ripped the box at the seams, stretching it out before laying it down in front of me. “Lay on this,” he said. I followed his instructions surprised to find that the thin cardboard barrier between my body and the asphalt made a world of difference. “Oh, my gosh, Vern. Thank you!” He smirked, “Don’t worry about anything out here,” he said with a grin. “I’ll protect you.” Vern, fell asleep within minutes of this pledge.

I awoke the next morning and he was gone. Our group of missionaries, seminary students, and social workers were already up and shuffling around. Someone had brought in a coffee urn and my cousin was in line with two paper cups. She had already rolled up her sleeping bag and packed up for the three mile walk back to my apartment.

I would look for Vern, over the next several months, on park benches and bus stops during my morning jogs. I kept a few dollars in my car in case I ran into him at some intersection on my drive home from work. Though I never saw him again, I know I am incredibly fortunate to have met him. There was no coincidence in the timing and set of circumstances that united us in that church parking lot a year ago. I am blessed to have had the opportunity to see Vern and I know that he was blessed to have been seen.

*Vern is a fictionalized name.