“Everything we do is about relationships. The biggest lesson we have learned over the years is that we are not a food ministry. We merely use food as a conduit to connect human-to-human and heart-to-heart.”

I first met Tony when our truck stopped in downtown Austin. Abandoned by his parents as a young child, the streets are the only home Tony has ever known. Sadly, his life was filled with drugs, gangs & violence. Tony went to prison, & after he was released, he tried to begin again. With nowhere to go & no one to turn to, Tony lived in a cardboard “house” in the woods.

In March 2005, Tony became our original Community First! resident & still calls one of our RV’s home. That same year, Tony met Pat, one of our founders & a tireless volunteer, when they were loading MLF trucks with supplies for Hurricane Katrina relief. They have been family ever since. 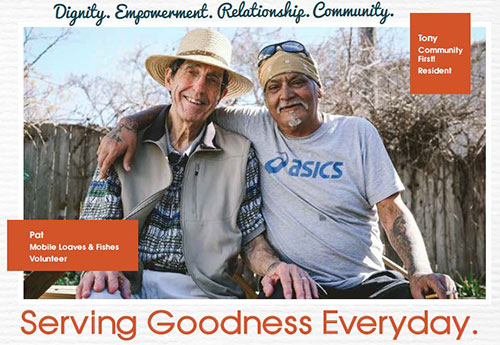 “Pat is the father I never had. He has helped me when I lost my leg to diabetes. He helped me through my divorce and when my son died, he was my rock.” –Tony

After several minutes of shifting and negotiating various levels of discomfort, I settled at [...]

Stories from the Streets – Amanda Quraishi

Until last summer I worked an organization called Mobile Loaves & Fishes, which serves the [...]

Stories from the Streets – Meagan Jones

Sleeping on the Sidewalk Sucks. A few weeks ago I went on a [...]